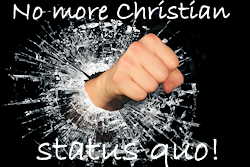 I'm talking about that refined and civilized version of the good news that goes something like this: Jesus died and rose from the dead so that you can live a life of endless comfort, security, and indulgence or the flip-side of that coin that says if you'll simply confess that you're a sinner and believe in Jesus, you'll be saved from the torment of eternal hell fire, then go to heaven when you die - if you can hang on to your faith until then.

Both are way too domesticated for the true calling that Jesus puts on our lives, which is one that demands action and He never lied about the danger or cost associated with becoming His follower. He began His public ministry with a simple invitation: "Come, follow Me." and warned "If anyone would come after me, let him deny himself and take up his cross and follow me.” (Matthew 16:24)  His closing instructions to His disciples can be summarized in one word, "Go!".and He told His followers up front, "I am sending you out like sheep among wolves." (Matthew 10:16a).

Jesus understood His purpose was to save us not from pain and suffering, but from meaninglessness.  We have a purpose to fulfill. Jesus did not suffer and die so that we could build for ourselves haven, but so that we might expand the kingdom of His love. Because invisible kingdoms are at war for the hearts and lives of every human being who walks on the face of this earth.

Looking around at the church today, one would think that His invitation was to "Come, and listen" and that our response to His command to "Go" is "No!"

It's time we shake ourselves out of our complacency and our perpetual pursuit of comfort and become the revolutionary force that storms the gates of Hell in order to reclaim souls for Christ - the force that bombards the gates of Heaven with fervent prayer for the souls of the lost and that God's will be done on earth as it is in Heaven.

I for one do not want to leave this world having lived a safe, but bland and ineffective life. I may not be able to single-handedly wipe out the evil forces of this world, but I can bring them to their knees as I wage spiritual warfare on mine!

"If my people, who are called by my name, will humble themselves and pray and seek my face and turn from their wicked ways, then will I hear from heaven and will forgive their sin and will heal their land." 2 Chronicles 7:14 (NIV)

Prayer:
Father, forgive our complacency, forgive us for living a pablum brand of Christianity. Show us the power we have to change the world, to root out evil and to be your hands extended to the hurting, lonely and lost in this world. Shake us to wake us, Lord. Give us the courage to set aside our comfort to be all that you have called us to be and call your people to a renewed commitment to Christ, to righteousness and to fervent prayer.  Amen

I so agree with you Jan! As I watch the news and read my Bible, I can't help but believe we are closer to Christ's return. Of course, we don't know the date or the hour. It could be tomorrow or years from now. But it is closer than it was yesterday.

I spend so much time with nonbelievers. And frankly, I think it's important that we interact with those who don't know Him. We may be the only Jesus they get to see. And what do they see in us? I pray about this all the time Jan.

All I can say is - come quickly, Lord Jesus! But then I think about those who don't know Christ and my heart wants to reach them - to let them know of His love, to pray them into the kingdom. I guess I'm torn between two worlds.

Good post! Way too much apathy in the Church these days. The early Christians wouldn't even recognize what it's become. We can just imagine what kind of letters Paul would be writing were he alive now.
Peace and Blessings

Haha - never thought about what kind of letters Paul would be writing to us. Makes me shudder!