Are You Kicking at the Goads?

We all fell to the ground, and I heard a voice saying to me in Aramaic, ‘Saul, Saul, why do you persecute me? It is hard for you to kick against the goads.’ Acts 26:14 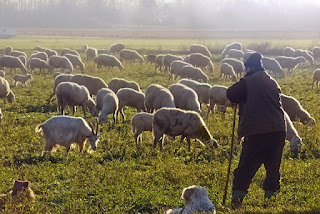 It's a spiked stick used to prod an animal in the right direction. Shepherds used it to lead their flock to safe and plentiful pastures or to prod them away from danger. Farmers used it to prod their horses or mules forward to plow the fields.

Saul was a devout Jew. He zealously followed Jewish law. He was so zealous, in fact, that he persecuted those who dared teach or follow any other beliefs. When Jesus came on the scene, preaching forgiveness and salvation, Saul took it upon himself to wipe out early Christianity.

I'm sure that God had been nudging, then prodding Saul toward faith in Jesus, but Saul had his own ideas about how to best serve God. Finally, God had to put a stop to Saul's killing spree and hatred, so as Saul was on his way to destroy more believers, God revealed himself to Saul in a blinding light.

Saul explained what happened to him like this when he stood before King Agrippa...

I saw a light from heaven, brighter than the sun, blazing around me and my companions. We all fell to the ground, and I heard a voice saying to me in Aramaic, "Saul, Saul, why do you persecute me? It is hard for you to kick against the goads."

"I am Jesus, whom you are persecuting," the Lord replied. Now, get up and stand on your feet. I have appeared to you to appoint you as a servant and as a witness of what you have seen and will see of me. " Acts 26:13-16*

Saul's kicking against the goads resulted in a three day blindness, but brought about a complete life change. Transforming a viscous Saul the Apostle Paul, who spent the rest of his life as a devoted follower of Jesus and taught other the truth about salvation through Jesus. It's too bad he had to go through so much tragedy before he would listen to God.

I think God uses prods to keep us moving in the right direction, to lead us to the blessings he has for us and to steer us away from danger. Not for punishment, or abuse, but in love so that we live the best life possible. However, just like a stubborn or rebellious animal, we often resent that nudges from God to go a certain way. If he gets more forceful in his prodding, we might get angry and kick against his will, preferring our own way instead. But just like the animal who is injured by kicking at the goad, we injure ourselves if we kick against God's leading. We invite trouble into our lives, we make poor choices which lead to dire consequences, Then when we find ourselves smack dab in the middle of a mess, we might blame God for causing or allowing the trouble we find ourselves in, when all the time, if we had just moved with his nudging, we would have been far better off.

How about you? Have you felt God nudging you in a certain direction or urging you not to go in another? Have you listened and cooperated or have you been kicking at the goads.

*You can read the whole account of Saul's conversion HERE.