"Avoid godless chatter, because those who indulge in it will become more and more ungodly." 2 Timothy 1:16 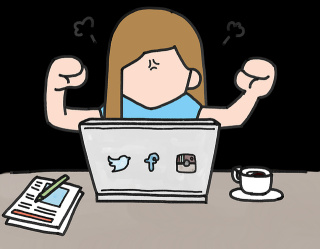 Several times in the past week or so, I've had people post comments to me online that seem to be aimed at starting a conflict.

My first impulse was to fire off a response that would have only added fuel to the flame. Fortunately, the Lord (and a couple of friends) gave me the good advice to not respond. I didn't, but I have to admit, to a lot of soul searching and  mental sparing with the people who made the comments.

I thought of brilliantly scathing remarks I could have made, convincing arguments to refute their claims, ways that they had acted inappropriately, but each time, the Lord reminded me that those responses would just make things worse.

The soul-searching was the worst and the best thing that came out of all this, because it gave me time to reflect, time to examine my own behavior in the past, time to repent and ask God to change those things in me that need to change. To make me a better person and a better reflection of Him.

This morning in my devotional time, I read 2 Timothy 2:16 that tells us to avoid godless chatter and those who indulge in it. I thought about those comments that tempted me to engage in what would have been a futile argument - godless chatter.

Then I read a little further...

"Don’t have anything to do with foolish and stupid arguments, because you know they produce quarrels. And the Lord’s servant must not be quarrelsome but must be kind to everyone, able to teach, not resentful." 2 Timothy 2:23-24

At that point, I felt justified in ignoring the comments...until I read that last little bit of verse 24..."be kind to everyone, able to teach, not resentful."  Is ignoring kind? Did I miss an opportunity to teach because I was resentful?

"Opponents must be gently instructed, in the hope that God will grant them repentance leading them to a knowledge of the truth, and that they will come to their senses and escape from the trap of the devil, who has taken them captive to do his will." 2 Timothy 25-26

And then it hit me. The devil was up to his old tricks. New scheme. Same goal - to get me riled up, tempt me to respond in self-defense and anger, stir up dissension with someone I care for, get me to act in a way that's unbecoming for a child of God.

How grateful I am for good friends who give good advice and for the Holy Spirit pulling me back from an immediate and improper response, because I now recognize those comments as bait - not from the person who made them - but from the devil, who loves to play one believer against the other so that it will destroy unity in the family of God.

"My dear brothers and sisters, take note of this: Everyone should be quick to listen, slow to speak and slow to become angry, because human anger does not produce the righteousness that God desires." James 1:19-20